Our company has gone through an international merger ( mid year 2020). Our Auditors are currently working on the US only financials and have suggested we do single year presentation. Given that the consolidated financials will be done at a later date, I am not sure why we would do single year presentation for US only books. They said that because of the volume of activity, they might not be comparable to PY but I was wondering if anyone else has had a similar suggestion from their auditors? I think the main change will be on the equity side and mergers costs, but other than that i don't see why they wouldn't be comparable.

It sounds like your question is why would they choose to delineate a single year of data when in your opinion a similar end is accomplished through the consolidated financials.

At cursory glance it sounds like the auditors identified a material audit risk, which in this case is inherent risk. I ruled out business risk since it was stated that activity has increased, precluding going concern risk.

As you may recall there are three types of audit risk: control, detection, and inherent. Since on top of the merger there indisputably have been significant changes to the business environment within the past year, I would not be surprised if the latter was the risk identified. There are multiple subtypes of risk which fall under inherent risk. 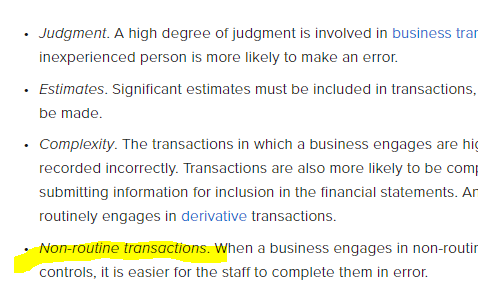 Ultimately, it is the firm's obligation to reduce the risk of material misstatement to immaterial levels in order to express an unqualified opinion. Otherwise stakeholders could find the firm liable for not meeting standards of due diligence.
Last edited: Aug 18, 2021
You must log in or register to reply here.