Long story short, the EFL and Derby County are in and have been in a dispute for some time and this is unusual- they Account for Player Registration Amortisation using Residual Values as opposed to what seems to be the UK football Industry Standard of Straight Line- ie Transfer Fee/Contract=Annual Amortisation Cost.

There was also the dispute regarding the £81.1m Stadium Sale and leaseback but the EFL seem to have given up on that.

Interested in people's thoughts basically, FRS 102 etc- the EFL are appealing with respect to the Amortisation method used or maybe even aspects of that charge, which the EFL lost first time round. 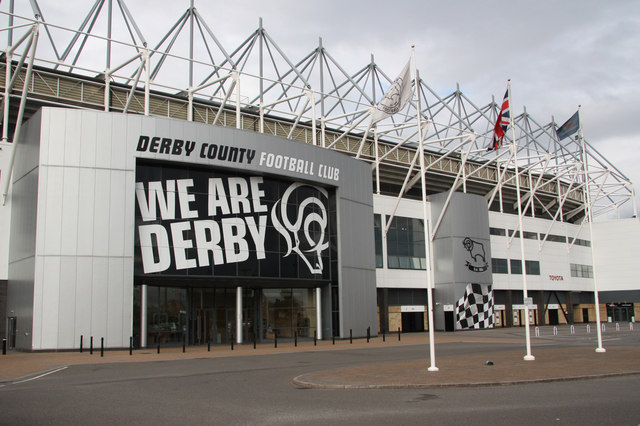 The East Midlands club, now home to England and Manchester United's all-time leading goalscorer Wayne Rooney, faces a legal battle with the EFL and the possi

Was stated last September that the EFL would be appealing but it begun today.

• The Independent Disciplinary Commission’s full Written Reasons in connection with the two charges brought by the EFL against Derby County are now published by the Club and are available here. The Club understands the EFL is also publishing those reasons on its website. The detailed reasons run...

Does also have an angle of whether charges can be brought retrospectively. Kieran Maguire flagged this to the EFL in June 2018, they were aware of this as per Written Reasons potentially before then, but only brought this specific charge in January 2020.

Hope you are well.
A

Hi @Fidget I hope you are well also.

EFL have won their appeal- though the Devil still very much in the detail! 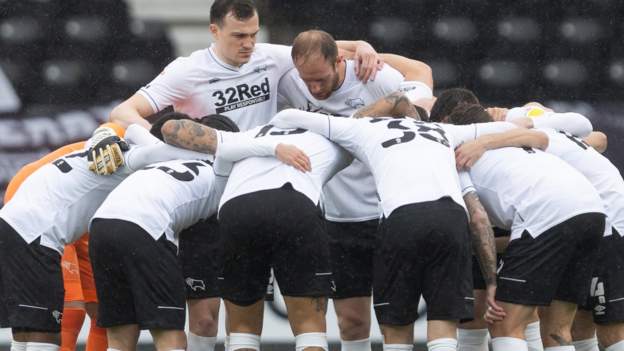 The EFL wins part of an appeal against Derby County over some of the Championship club's accounting policies. An Independent League Arbitration Panel has allowed the EFL’s appeal against the outcome of an independent Disciplinary Commission in respect of misconduct charges brought against Derby County. 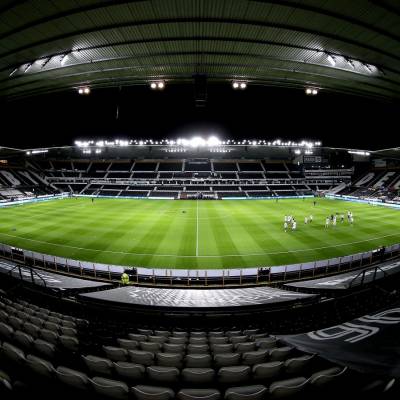 The League Arbitration Panel LAP has granted a limited aspect of the EFLs appeal against the Decision of the Disciplinary Commission DC in August 2020 in relation the EFLs Second Charge against the Club relating to the Clubs amortisation policy No appeal was brought against the DCs dismissal of...

Depending on the finer detail- Written Reasons would determine this, it could be the case that Derby are forced (possibly for P&S/FFP purposes only) their Accounts for the last 6 seasons, with respect to the Amortisation. Some estimates have a £30m gap between 2015/16 and 2017/18, ie that 3 year period- I've also seen £21m cited elsewhere.

Either would see them fail to 2019 and maybe to 2018, and not really tried to speculate for other periods, not helped by a lack of Club, Consolidated or Companies within the Group Accounts since 2019 (for the FY to 2018, but 2019 when they were released).

Where it goes from here who the hell knows- Derby and EFL cannot Appeal the decision, but the Sanctions can be- assume that goes for both, Sanctioning Hearing I think- EFL would like any penalty imposed by the conclusion of the season.
A

Accounting Article on it... 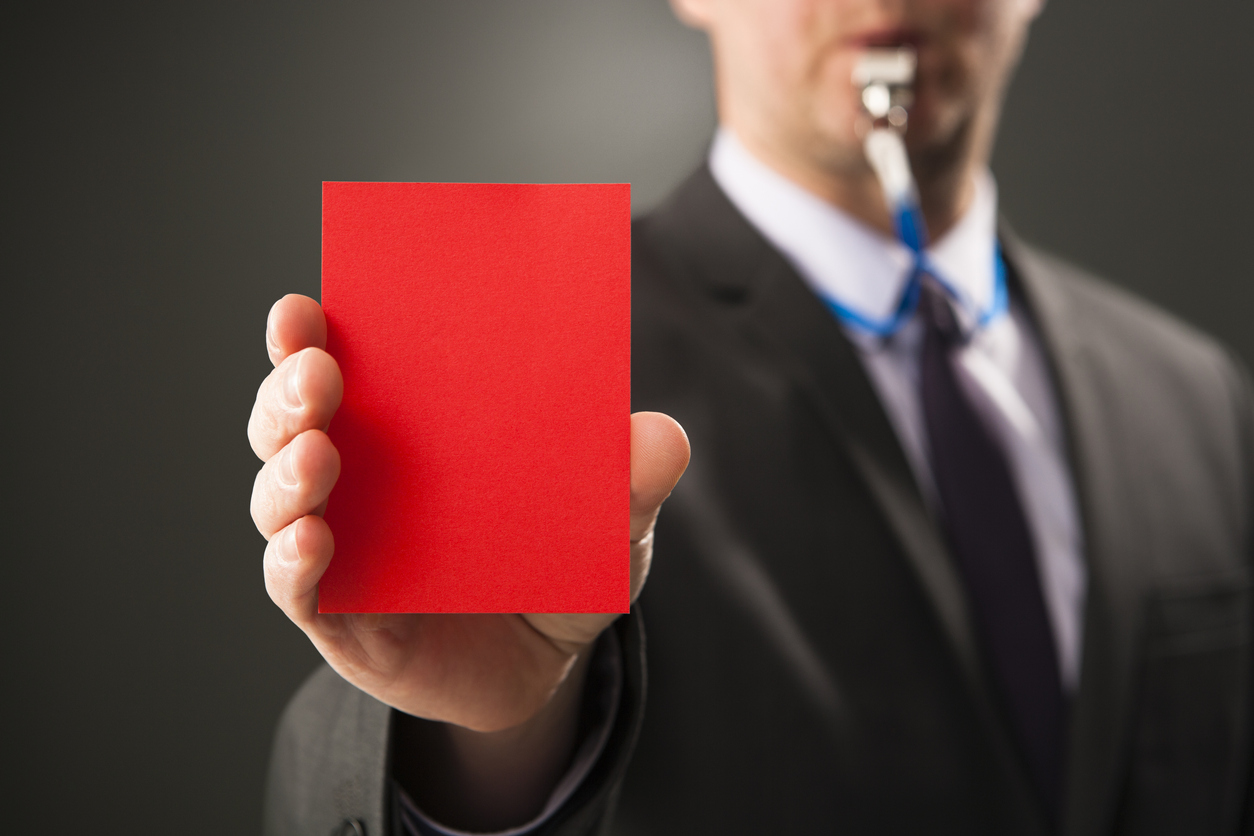 After narrowly surviving relegation, Derby County’s celebrations were cut short when the English Football League announced on Tuesday it had won part of an

The EFL said an Independent League Arbitration Panel “determined that the club’s policy was not in accordance with accounting standard FRS 102 because it failed to accurately reflect the manner in which the club takes the benefit of player registrations over the lifetime of a player’s contract”.

The original disciplinary commission had already concluded that the club “did not adequately disclose in its financial statements the nature and or effect of its change in accounting policy”, the statement added.
Click to expand...

Which bit is more accurate- not in accordance with FRS 102 or inadequate disclosure?
A

...May 11th it came out that Derby had been found Guilty. This went quiet for a while and then on June 24th...

...The EFL took the extraordinary and unprecedented step of releasing an 'interchangeable fixture list' for Derby and Wycombe- one in the Championship and one in League One... 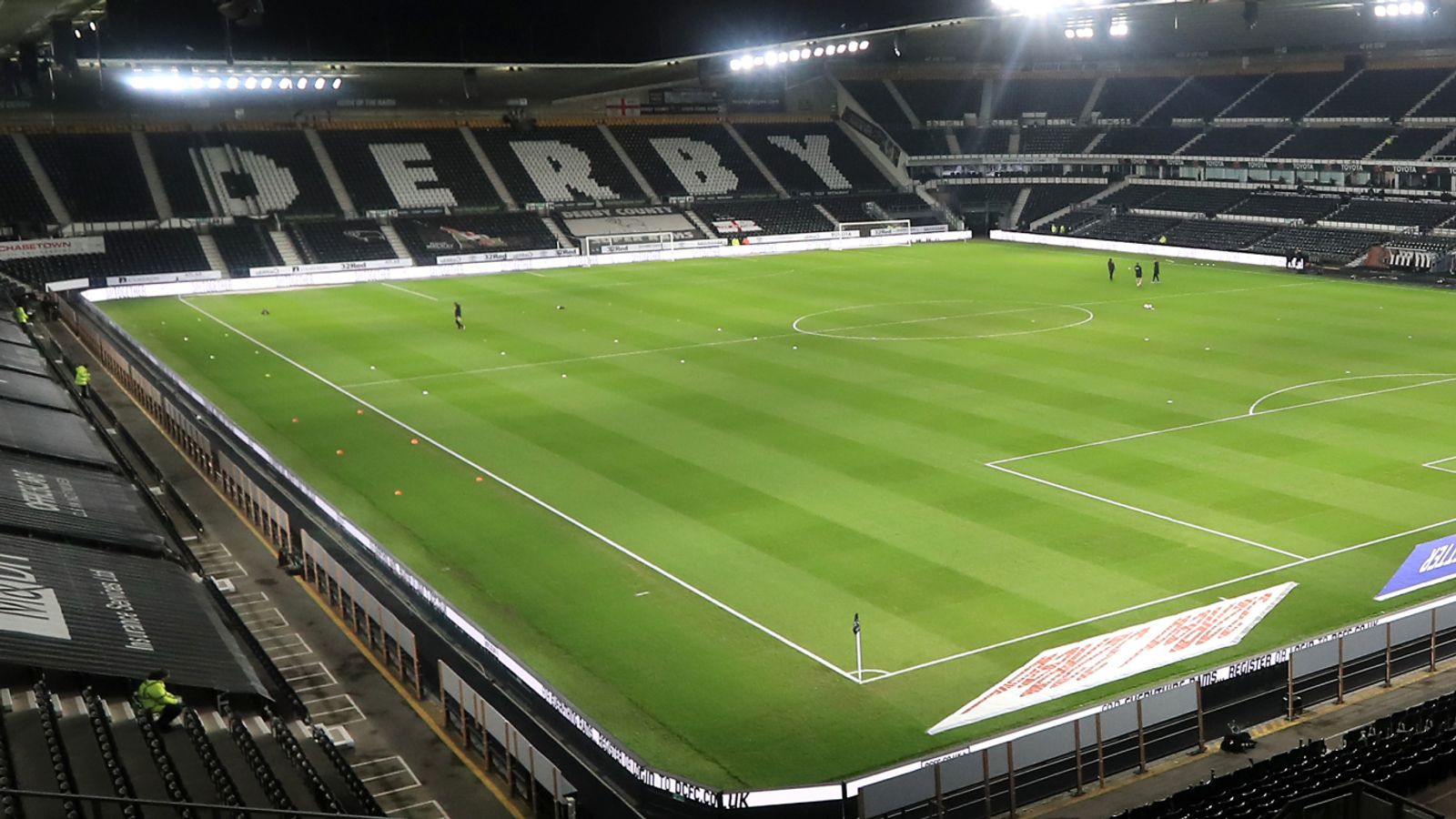 An independent disciplinary commission has fined Derby County £100,000 for accounting irregularities; the EFL has developed an interchangeable fixture list featuring the East Midlands club in both the Championship and League One, as the threat of relegation lingers due to potential appeals

In between that, Wycombe labelled Derby serial cheats amongst other things in an explosive public statement and didn't rule out legal action for damages- under EFL Regs I suspect could be a non-starter but who can say.

...Verdict out also on June 24th- £100k fine for Derby, but more crucially and as I expected might be the case, they have to Restate- maybe externally but certainly for FFP/P&S purposes ie to the EFL and Disciplinary Commission, their Accounts for 2015/16, 2016/17 and 2017/18- as the EFL Statement and Written Reasons confirm. Have to restate using Straight Line or perhaps Straight Line with Contract Extension method- have until August 18th- certainly don't think the EFL will be amused let's say if they look for a further method of Amortisation that is neither ERV, Straight Line or Straight Line with Extension...IDC will probably take a dim view on this too. Not sure that would be permissible with FRS 102, certainly would see the EFL- who knows maybe they would reject the Accounts!?

EFL considered an Appeal but were advised limited chances of success- ie the Appeal to send Derby down basically, so go with the current timeline etc. The EFL can today publish the written reasons relating to the Independent Disciplinary Commission’s sanction verdict in respect of the recent proceedings between the EFL and Derby County.

As an aside, Derby remain under Embargo as it stands.

Yes, their method of sale price based on ERVs- Estimated Residual Values- was deemed impermissible under P&S certainly and quite likely FRS 102.

Accounting Policy 2.4 appears to be unique in the Football Industry- well maybe it's in play elsewhere, but in the UK...non Football related Intangible Assets are unimportant FFP wise. Appears to be silent on the Estimated Residual Values when it comes to Profit or Loss on Disposal, even if it is the case. EFL also seem to believe that Derby are trying to exclude some Amortisation/Impairment of Player Registrations from the Books entirely but that's for another post! 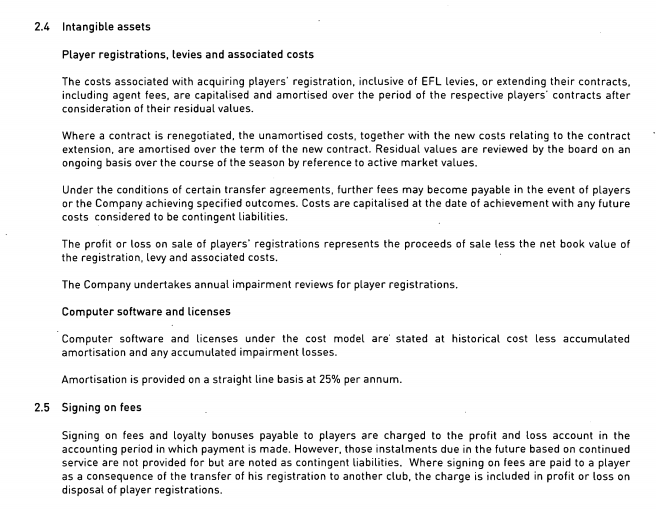 The standard however- these are their most recent Accounts, 2018 no less- ie none for 2 years!

Under the old ownership, the policy was much more conventional- the norm! 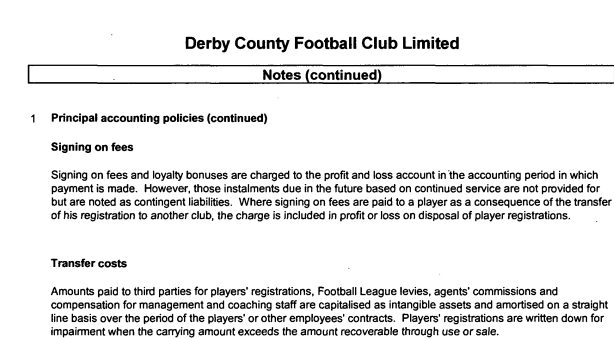 Not getting into the nitty gritty at this time of night lol, but feel free to read all at leisure- Expert Witness for the EFL, Professor Pope's evidence appears to have been key here- Derby did not provide an Expert Witness to advocate for their policy...

If Restated Accounts to 2018 show losses rising to £39m, the EFL will surely push for a deduction in line with the quantum of the breach- and that in turn will have a knock on effect to 2019, again same applies- presumably it will lower the Amortisation bill in 2019/20 and 2020/21 however but that £39m figure is key- you could even work backwards, as those adjusted figures will impact upon the 3 years to 2016/17 and probably for the worse! EFL haven't even brought this period up...oh and the Pride Park sale disappears- drops off- the books now!! Gone- bye bye, and clubs can't utilise it in future for P&S as Clubs have voted to adjust it out of the calculations.
Ad

Seems that Derby were due to submit to the EFL their Revised and Restated Accounts last Wednesday- so 18th August 2021.

Unsure how the company above, Sevco 5112, fits into all of this.

I digress, they got some extra time and the EFL said they have received further information as today was the deadline- but local paper up there says it was the Accounts and a journalist called Reluctantnicko says that the EFL have not...so who knows!
A

Minus 12 points for that- the automatic deduction as per EFL Regs voted on by clubs years ago.

As for the EFL and FFP issues, well with admin it's unlikely the 2019 or 2020 accounts will see the light of day any time soon, but the latest talk is...and this is separate to admin, the FFP issues will remain with new owners, administrators- whoever. This would be a settlement agreement for all the outstanding issues.
Ideally, tying 2 and 3- ie compliance when the financial projections go in March 2022 would be ideal, ie if they're over then 9 > 12 just like that.

Could be looking at a 21 point deduction in total, perhaps 24- and they also separately have a suspended 3 point deduction that becomes active if any wage issues between now and end of June 2022.

Further, I can't recall the exact ruling but there is something about CVAs. If one of them not agreed then it's a 15 point deduction in 2022/23 as well, that's standard for all clubs in that position.

I assume that they will have some limits on spending and some kinda Business Plan under admin as well, regardless of the FFP issue.

Reportedly, they...
You guys know more about accounting etc than me, insolvency- all that. What exactly do administrators do?
Ad

Finally it has come to a conclusion!!

@Fidget you might be interested- hope you are well. 2nd bit is the Written Reasons themselves for the agreed decision.

The EFL has today confirmed that Derby County Football Club has received a nine-point sporting sanction with a further three points suspended after admitting to breaches of the League’s Profitability and Sustainability (P&S) rules.